I figured it’s about time to start up the old blogging machine again. With so much happening lately and people constantly asking me “so what’s new with you? I’ve been trying to follow you on your blog but you haven’t posted anything!” Well for those of you who know me, you know it’s rare that I get a spare moment to just sit down for more than a few minutes at a time. But I’ve made it my goal to start getting back to blogging and updating what’s going on in my big world.

Since my last post, (AUGUST?!) I have had the most incredible experiences. One of which was going to the National Sweetheart Pageant with over 40 of the nation’s 1st and 2nd runner ups from their state pageant. For those of you who don’t know what this is, the National Sweetheart Pageant is a pageant that has been around for over 70 years and gives the 1st runner up to every Miss America State pageant the opportunity to see what it’s like to compete at a national level. My roomie was from Massachusetts, miss Taylor Kinzler, and we had the most unbelievable time learning how to drive tractors, riding around in the “Show Your Shoes Parade”, staying with our wonderful host family, and getting to know the other hilarious and sweet contestants. We all had a reunion back in January at the Miss America Pageant where I was able to support my good friend, Kylie Koefed as she represented Idaho. By far one of the funnest weeks of my life! I got to go around Vegas for a week hanging out with my sweetheart girls, my shuck from Indiana and was introduced to my new Indiana loves of my life, and spent some quality time with my mom as we watched the Lion King (which I have always wanted to see!) and the Elvis Cirque Du Soleil. I now have a serious Elvis addiction and the desire to go back and see it at least a dozen more times.

I have also been writing as a sports journalist for Boise State’s Arbiter. Who would have thought I could have gotten so into sports, but I absolutely love my position and have been able to follow our talented and inspiring gymnastics team as two of our gymnasts recently made it to nationals. Our team as a whole was 0.025 away from making it as a team to nationals which was such an accomplishment and the highest they have ever gotten.

I have also decided to give Miss Idaho a round 4! About a month ago I won the title of Miss Tri-Counties, ironically the first local I ever competed in when I was just a youngin! Since then I have been going around and spreading awareness of my platform “Building the 3C’s Through Girl Scouts- Courage, Character, and Confidence”. I have of course been continuing my “Free To Be Me” self-esteem workshops and I am incredibly excited to announce that they will be part of the Girl Scout’s summer camp program this summer of 2011! I could not be more blessed and thrilled about how far they have come.

Currently I have developed a, I guess you would call it an addiction, to hot yoga. I am in the midst of a 30 day challenge that I so crazily signed up for a little over a week ago. I blame it on my lack of ability to focus after a session last week. For those of you who don’t know what hot yoga is, it’s bascially taking a yoga class, but in a room that’s about 105-110 degrees and you sweat out all your insides for 80 minutes. By signing up for a challenge, I am supposed to complete 30 of these sessions, in 30 days. Today was an early morning wake up at 5:35 for day 10! 20 more to go! So far so good but we’ll see how it’s going after the halfway point.

I think that’s a pretty good update though as to what’s been going on since my last post. So here are my goals for the week

1. I will NOT skip a single day of hot yoga this week and I WILL complete my 30 day challenge.

2. I will aim for at least an 88 on my Communication Theories exam…this could be pushing it but that’s what these goals are for!

3. I will finally finish my laundry that has taken me almost 4 days now to finish. It’s definitely been one of those weeks.

oh…and of course
4. I will not become a stranger to the blogging world again!

It’s good to be back! 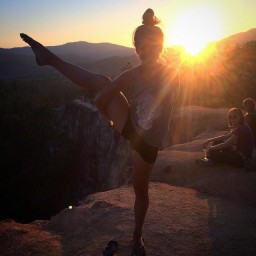